Yesterday, we used the Monash University First Year Geology Field Trip as a good excuse to check out "Swim O'clock Rock", which we might remove in 2011 (unfortunately, John, our excavation manager, was not at site so we'll need to show him this rock later).  There were 8 existing rock saw extraction holes, and we found another 6 surface bones.
Dave, Lesley and Stephen confer before more scrutiny of the bones on the surface. 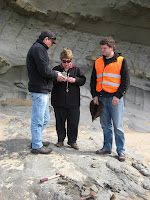 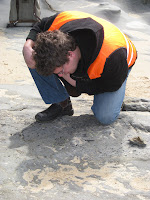 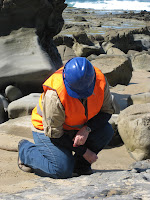 There were about 150 students on the beach, and several instructors in hi-vis vests;. 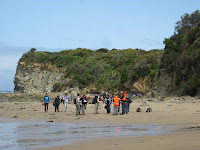 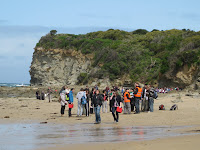 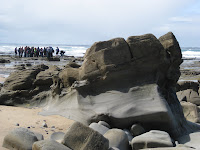 We circled the bones in yellow crayon and extracted a couple of them.  The rest we left in situ for today's field trip (another 100 students!). 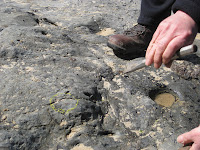 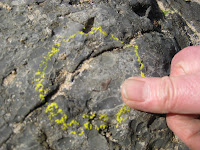 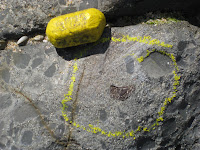 One of the students brought along "Fluffy, destroyer of worlds until evolution destroyed him".  They pose with Dave. 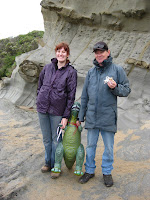 The Artist and the Scientists 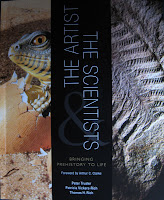 The Artist and the Scientists was launched last night at Treetops in the Melbourne Museum.  A number of Peter's original artworks were on display, and he and Pat Vickers-Rich talked about the book and the collaboration process.
Check it out at http://www.cambridge.org/aus/catalogue/catalogue.asp?isbn=9780521162999.
Posted by Wendy at 21:12 No comments:

We are currently planning a rock-breaking weekend focusing on examining and reprocessing low-rated wrapped fossils from prior years.  This will give us a chance to do a dry run of our new house in Cape Paterson and figure out what we would need to bring to get it functioning at fully capacity in February.
Posted by Wendy at 10:05 No comments: